Is this your first time in the capital of Czech Republic or are you just aiming to refresh your memory and relive your Prague highlights experience? Either way you are on the right page.
Get on a journey along this fairytale route and enjoy the bohemian allure of one of the most beautiful cities in the world.

Prague is the perfect place to immerse yourself in culture and history, indulge in great food and soak up the atmosphere of the many traditional cellar-pubs in town.
The city became a tourist destination after the Velvet Revolution - or Gentle Revolution - in 1989, which led to the end of the Communist regime and the transformation of the country in a parliamentary republic.

Since then, Praha City welcomed more and more tourists every year, quickly becoming one of the most visited cities in Europe and in the rest of the world.
The "city of a thousand spires” has so much to offer to visitors and it’s an absolute feast for the eyes, but what are the 5 places on top of every must-see list?

If you are wondering what are the absolutely not-to-be-missed places in downtown Prague and how to spend your first day in the city, we recommend you to check our top 5 list.

The answer is not easy because every corner in the city has a story to tell, but whether you are joining a Prague tour with a professional tourist guide or exploring the Czech capital on your own, just ensure to spend some time in the following places. 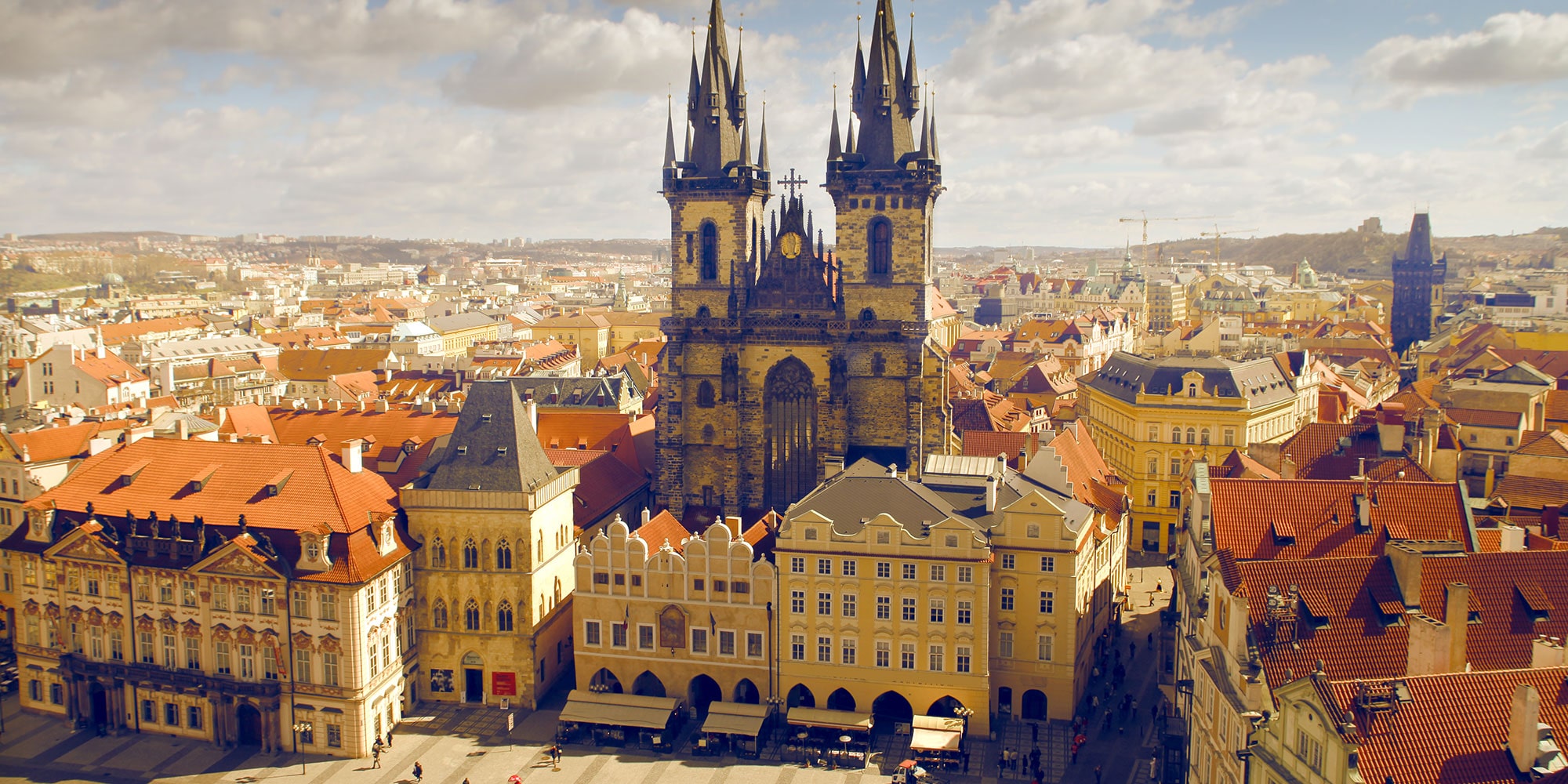 Prazsky hrad or Prague Castle is a Unesco heritage site and it is considered the largest castle in the world. The area comprises courtyards, palaces, gardens and museum, Prazsky hrad is considered the heart of the city and it is definitely on top of every Prague highlights list. The historical core of dominates the urban skyline and from the top of a hill in.

It could take 1 whole day just to visit the 70.000 square meters citadel but we would like to highlight the main spots and buildings you could focus your visit on:
• St. Vitus Cathedral: an impressive Roman Catholic church representing the magnificent Gothic architecture which is considered the most important church in the country. This building homes different tombs of many Bohemian Kings and Holy Roman Emperors and it is a well preserved piece of the Czech history. Unmissable!

• Prague Castle Picture Gallery: the Emperor Rudolph II had an impressive paintings collection which is displayed in the art gallery inside the castle area through the whole year. Titian, Rubens and Aaachen are among the artists that can be seen and admired here.

• Golden lane: Originally built in the 16th century to provide a home to the many Rudolph II Emperor guards, Golden lane is a picturesque alley comprising many lovely small houses which are used today as souvenir shops and a museum of medieval armory. Many legends surround this area and it’s very interesting to hear stories about alchemists trying to convert metals in gold (that’s why this street was temporary called Alchemists lane). According to another legend, the famous novelist Franz Kafka lived in Golden lane at number 22 during his life.
Location: Hradčany, 119 08 Prague 1, Czech Republic.

Prašná brána or Powder Tower is one of the original city gates built in 1475 to divide Praha Old Town from the New Town. Once a gunpowder station - hence its peculiar name - it’s today a significant tourist attraction in downtown Prague and host a viewing gallery located at the height of 44 meters.
The tower can be easily reached by foot either from the “Náměstí republiky” metro station or from Wenceslas Square, along the shopping street “Na Příkopě”.
Location: nám. Republiky 5, 110 00 Staré Město, Czech Republic.

Every day, on the hour, people gather under the impressive Old Town Hall to watch the Astrological Clock in action. Although the clock performance lasts only 45 seconds, this is definitely one of the Prague top attractions ant it’s rich in intriguing symbolism. The Astrological clock is now one of the best known - and most photogenic, which is always good - places of interest in Europe.
Location: Staroměstské nám., 110 00 Josefov, Prague 1, Czech Republic. 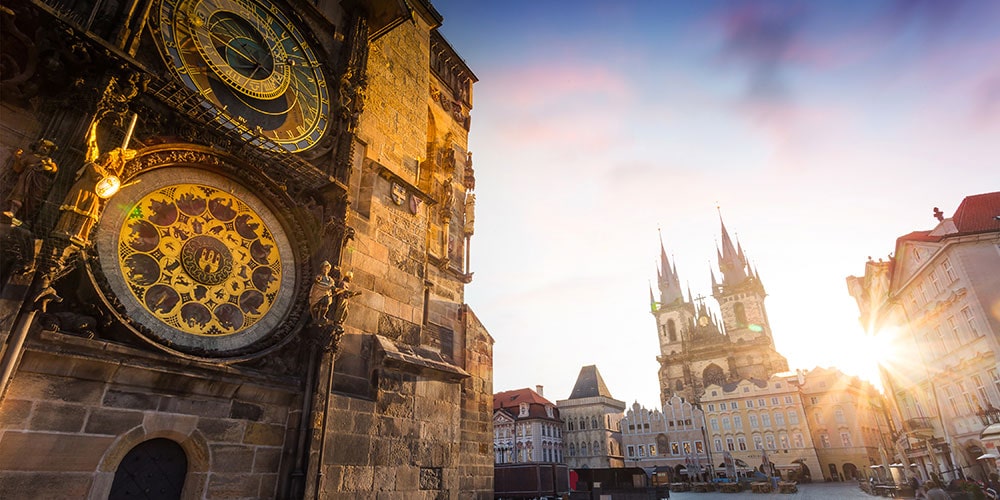 If you opt to take one of the many Prague tours available in town, you will hear many spooky legends about this historic bridge crossing the Vitava river, and also some curiosity about the site.
When the bridge was first built in the 14th century, constructors decided to add some “special” material to bind the stone blocks with the thick dough. In order to make the bridge stronger, they added eggs, milk, and another legend even say wine and flour. To this day, they say a dash of milk and a bit of egg yolk are added to every new statue carved for replacing the old ones on Charles bridge.
Location: Karlův most, 110 00 Prague 1, Czech Republic.

Is there anything more romantic and dynamic of the dancing duo Fred Astaire and Ginger Rogers? Not sure about that.

Surely the Czech - Croatian architect Vlado Milunić agreed on this and was inspired by the energetic artists to the point of dedicating a whole building to the immortally famous dancers.

The Dancing house - Tančící dům in Czech - informally nicknamed Fred and Ginger, resemble the famous pair dancing together in its controversial and non-traditional design. Standing along Baroque, Gothic and Art Nuveau buildings, this great example of deconstructivist architecture, also knows as new baroque, is characterized by the total absence of harmony or symmetry and for this reason was heavily criticized when it was first built.

Later on the Dancing House went from being blamed for disrupting the harmony of the city to become an iconic element of the urban landscape, and it’s now mentioned along the main Prague highlights in most tourist guides.
Location: Jiráskovo nám. 1981/6, 120 00 Nové Město, Czech Republic.

A guide to Prague Christmas markets

Where to Stay in Prague